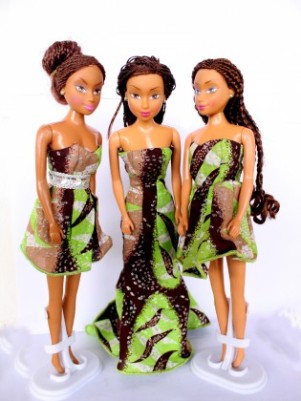 As Barbie sales continue to plummet, another doll is aiming to slide in and take her place—in Nigeria, that is. The Queens of Africa and Naija Princess dolls are outselling Mattel’s original. The dolls’ mastermind, 43-year-old Taofick Okoya, told Reuters that he sells between 6,000 and 9,000 dolls per month, claiming 10 to 15 percent of the small but growing toy market in Nigeria.

The success of the Queens of Africa dolls, which are modeled after the country’s three largest ethnic groups and outfitted in gowns and traditional headwear made from West African fabrics, is proving there’s a sizable market for dolls that are not fair-skinned, blond, and blue-eyed. Okoya’s dolls might be so popular precisely because they’re the only black ones on the market in Africa.

In an interview with Elle magazine last year, he said he got the idea for the dolls when he went looking for a meaningful birthday gift for his niece, only to discover that there were no “African dolls she could relate to or identify with.” 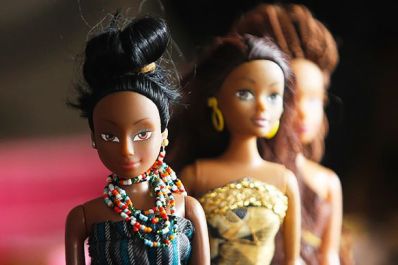 So he set up his own business, outsourcing manufacturing of the doll parts to China, having them assembled in colorful patterned dresses in Nigeria, and selling them for 1,300 to 3,500 naira (about $22) each. Seven years later, he produces about 100 to 150 dolls a day and hopes to run the entire operation locally.

Okoya’s dolls weren’t always flying off the shelves. It took him nearly three years to convince retailers that black dolls would sell. To aid the cause, he launched an educational campaign about the psychological impact dolls have on children.

“When little girls play with dolls, they see themselves in or as the doll, they dress it in clothes they like and act out their fantasies,” he told Elle. “The more of their own likeness they see in the things they like, the more accepting they will be of their looks and culture.”

The success of the Queens of Africa dolls comes at a time when typically white Barbie dolls are rapidly declining in popularity among children. By the end of 2014, Barbie sales had dropped by 10 percent for four quarters straight, and sales of rival American Girl dolls—which discontinued some of its nonwhite dolls—decreased by 7 percent.

Meanwhile, most of the Queens of Africa dolls online are sold out, and Okoya is attempting to meet skyrocketing demands. In addition to ramping up production, he also plans to make the dolls curvier, with bigger hair and fuller facial features to enhance their “identifying African characteristics,” he told Elle.

An educational animation series and a line of books is also in the works to further Okoya’s message of empowerment. “The goal is not just selling pieces of molded plastic, but also to inspire and create a sense of appreciation of them by promoting value, culture and heritage,” he told Elle.